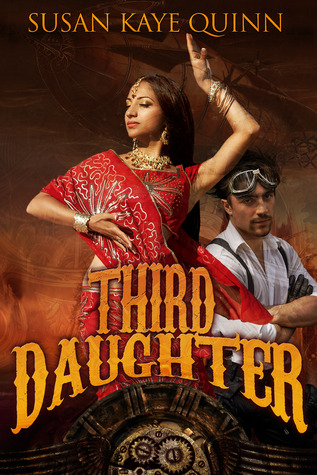 FREE for a limited time

Skyships, saber duels, and lots of royal intrigue… and, of course, kissing.

The Third Daughter of the Queen wants her birthday to arrive so she’ll be free to marry for love, but rumors of a new flying weapon may force her to accept a barbarian prince’s proposal for a peace-brokering marriage. Desperate to marry the charming courtesan she loves, Aniri agrees to the prince’s proposal as a subterfuge in order to spy on him, find the weapon, and hopefully avoid both war and an arranged marriage to a man she does not love.

Third Daughter is the first book in the The Dharian Affairs Trilogy (Third Daughter, Second Daughter, First Daughter). This steampunk-goes-to-Bollywood (Bollypunk!) romance that takes place in an east-Indian-flavored alternate world filled with skyships, saber duels, and lots of royal intrigue. And, of course, kissing.