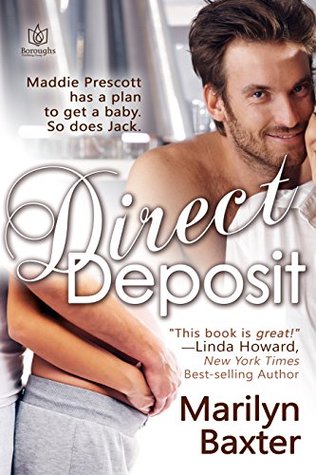 We never know when Death will appear. And we are never prepared. Maddie Prescott and her husband, Alex, weren’t prepared for Alex to die from leukemia, and Maddie is afraid she will never have a child. So sad that they were so thoughtless as to not bank sperm … (just as an aside, that is the first thing my oncologist asked me – “Do you want to bank eggs?”)

Now, Maddie is planning to have a child on her own, using a sperm bank. Nothing unusual, a straight business transaction. Then, along comes Jack, Alex’s old friend. The old friend who promised to take care of Maddie after Alex died. And when Jack finds out about the sperm bank, he is determined to stop it.

Wow. Even Alex apparently didn’t consider Jack a “good man”. And Jack really didn’t want to help her out, as is pointed out early on in the book – “So he’d made the damn promise and spent the last year making good on it . . .” And over that year he proves it over and over, in so many different ways, it really sort of creeped me out. From him thinking that Maddie, a successful family lawyer, was too dumb to make her own decisions, from the sperm donor to “If nothing else Jack could make sure she didn’t do anything dumb like buy stock in some wildly speculative venture or cash in her 401(k) and invest it in a pyramid scheme” to the multiple instances pointing out that he has the “attention span of a gnat” a “temper and a smart mouth (that) usually got him fired within a few months,”  and the cliche “But sometimes it was way too easy to dig at her” Jack proves over and over that he is “immature, unreliable, undependable and irresponsible.”

I know a lot of people find this type of “little boy” behavior acceptable. “Sexy”? I don’t know. The reviews I have read are positive, so there are many who apparently liked the book. Me? Not so much. I wish I could give it a better review. Jack is so focused on the “no fatherless child” I found it irritating and insulting that the author seems to find the whole “having a father” issue more important than having a ‘good’ father figure. One who isn’t immature, unreliable, undependable and irresponsible.

There are many who will love this book for its HEA, and I am glad they will enjoy it. For me, it just didn’t work. I will say the writing is good, the character development is better than I expected it to be though it disappointed me in the end, but if this is your sort of thing, enjoy!

I received this book from the publisher in return for a realistic review. All thoughts are my own and not limited by any outside influence.