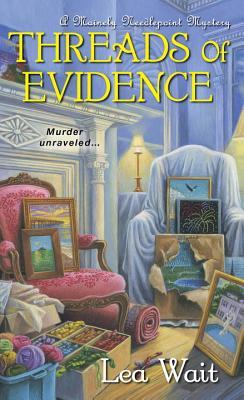 “Cleaning Woolwork: If the woolwork is not much soiled, stretch it in a frame and wash it over with a quart of water into which a tablespoon of ox gall has been dropped. If much soiled, wash with gin and soft soap, in the proportions of a quarter of a pound of soap to half a pint of gin. – The Dictionary of Needlework: An Encyclopaedia of Artistic, Plain, and Fancy Needlework, London, 1882”

The members of Mainely Needlework understand the importance, and the history, of those pieces meticulously stitched by hand and folded gently into a girl’s trousseau. Saving the old, and creating new to carry on the tradition. Now that Angie Curtis is back in Haven Harbor (well, at least for six-months. Really. Just six months, then she is back to Arizona.) she is managing her grandmother’s business, though she really knows nothing about needlework. But she is good with business and she is able to help with her grandmother’s wedding to Reverend Tom, so life is good on the Maine Coast. And when Angie and her friend Sarah are asked to appraise the contents of the old Victorian known as Aurora, a house with a dark history, things are looking up for Mainely Needlework and Angie. Sold to a famous actress, Skye West, the decrepit house is slated to be brought back to its former glory. But things aren’t quite as they seem. Skye has another agenda. Back in 1970, Jasmine Gardener, daughter of the Gardeners who owned Aurora, died. And Skye is determined to find out who murdered her.

The only problem? Angie, as a former private investigator’s assistant, is comingclose to the answer.  But someone is determined to assure that Skye doesn’t find out what happened to Jasmine. And if arsenic doesn’t work, fire might. The answers may be in the unlikeliest place – the needlework samplers stitched by Jasmine’s mother after her death and being restored by the Mainely Needlework stitchers.

This is the second in the Mainely Needlework series, but you can comfortably read it (though the first one sounds really good!)

I received this book from NetGalley in exchange for a realistic review. All thoughts are my own. 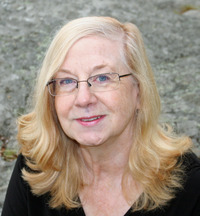 Maine author Lea Wait writes the NYT-praised 7-book Shadows Antique Print Mystery series, the latest of which is SHADWS ON A MAINE CHRISTMAS, and the Mainely Needlepoint series which debuted with TWISTED THREADS in January, 2015, and is followed by THREADS OF EVIDENCE in August, 2015, and THREAD AND GONE, in December, 215. Wait also writes acclaimed historical novels for ages 8 and up set in 19th century Maine, the latest of which, UNCERTAIN GLORY, takes place in a small northern town during the first two weeks of the Civil War. Lea’s LIVING AND WRITING ON THE COAST OF MAINE, about being an author and living year ’round in Maine with a husband who’s an artist also includes writing tips. Lea did her undergraduate work at Chatham College (now University) in Pittsburgh, Pennsylvania, and her graduate work at New York University. While she was raising the four daughters she adopted as a single parent she worked as a manager for AT&T. Now she writes full time and speaks at schools and libraries. She loves rowing, visiting historical sites, and, of course, reading and writing. See her website, www.leawait.com, and the blog she writes with other Maine Mystery writers, http://www.mainecrimewriters.com, and friend her on FB and Goodreads.

One thought on “Review: Threads of Evidence by Lea Wait #CozyMystery #NeedleworkSamplers”