Celia Kyle Does Awesomesauceness Again With You’re Kitten Me 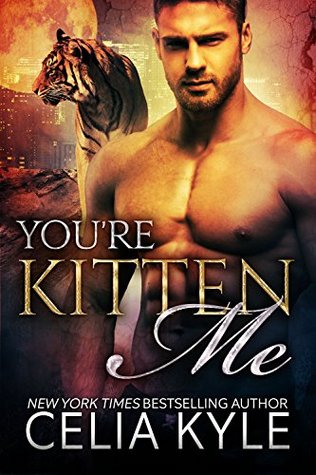 Here is the thing, Celia. You are pretty much the Queen of Awesome-sauceness. So say I, and so say we all! And who couldn’t agree? Everything that flows from your pen (computer? Tablet? Whateves.) is a delicious blend of funny, dramatic, suspenseful, and just darn fun!

Take You’re Kitten Me. The newest series by Celia is a blast. So far centering around the “coming-out-of-the-closet” of the tigers in her much-like-ours world, the first story, Fast and the Furriest introduced us to the tiger pride, and its leader, Ares. Poor Ares. Even though the lions and wolves and bears (Oh, My!) are “Out” to the public, the tigers just want to be left alone. And they stay hidden – that is, until they are rudely shoved out of the closet by an article, complete with photos, in a nasty little bit of yellow journalism. An article printed under the byline of the woman Ares thought was his. Oops. Of course, it doesn’t help that the article points out that, if you can pull a tiger’s tail, he (or she) belongs to you forever. Ah, Hell, thou hast no idiocy such as that of a human shifter stalker. “Uh, hey, lady? Really not cool to terrorize the poor pregnant tiger lady up a tree trying to pull her tail. Uh, yeah, I said pregnant tiger lady.” Oy. Needless to say, it was a zoo. And it doesn’t help that DoPE (Department of Paraphysical Entities) is trying to capture high ranking female shifters in order to force them to mate with humans, so that said humans puppet masters can take over the shifter groups and control them (read: Turn them into war machines). Again, Oy.

In this second book, the women are still under attack, and the stakes continue to get higher. A few women have been taken or attacked and had their tails pulled – Ares sister among them. And the daughter of the national wolf alpha, Veronica, “Ronnie” to her friends, has been attacked twice. Desperate to protect her, her father sends her back to the tigers, where her best friend and Ares mate, Zoe, lives. Only, they aren’t on the ground for ten minutes before Ronnie is attacked by humans – twice. Though she has a knife at her throat, the human press don’t catch that part, only the part where Ares’ Second, Branden, and two of his security team kill two of the attackers and critically injure one. Don’t mess with an Alpha Second when his ‘gonna be mate, no matter if she is a wolf or not’ has a knife at her throat. Ah, well. So much for the whole “We really are just harmless little kitty cats” motif. And of course, DoPE (perfect acronym, BTW) jumps on the opportunity to lock up Branden, his security team – and Ronnie as well. And you can just bet what will happen to poor Ronnie if a certain manipulative General gets his hands on her. Daughter of the National Wolf Alpha, chosen of the National Tiger Second? Score for General Disgusting Monster, all the way around. Hum… you know, as usual, the humans come off as the true monsters. Well, yeah, I can see it. If shifters showed up amongst us tomorrow, you can pretty much call it from the UF books – some salivate to get themselves a piece of ‘critter ass’ while others variously hate, intend to kill, and intend to force them into military service – or onto autopsy tables – in the name of ‘National Security’. Sigh. Hey, as if the guy next door who mowed your yard for you when you were sick and his wife who brought you chicken soup are suddenly monsters just because you suddenly found out that they like to run on four legs when the urge strikes. Ugh. Humans. The gift that keeps on needing a good gene pool cleaning . . .

So, again, Celia is Awesomesauce to the Max! And you really should rush right to your reading device, or local book store, and grab up everything she has written. But starting with the Tiger Tails series is a great start if you haven’t done so already. Enjoy! I absolutely did.

I sometimes get books from Celia in exchange for realistic reviews, but in this case, I just bought it. Couldn’t help myself – So excited to get the next in the series!