What the Sleigh? Mina Carter 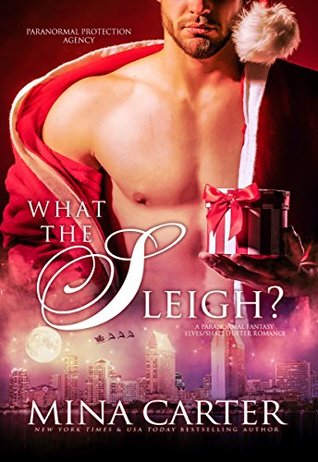 I admit it. I am a bit of a sucker for Mina Carter, just as I am for her often-times writing partner Celia Kyle. Their writing is light, fun and sexy, just what a ‘strained-brain’ often needs. So, I was tickled to see What the Sleigh? In my inbox. Book 10 in the Paranormal Protection Agency series, these books are just plain fun.

Ya know . . . just because you are the Grandson of the Main Man of Christmas, that doesn’t mean that you can’t be a true and total jerkface. And pay for it, big time. Nick Claus learns that the hard way when he stomps on the heart of Rudi, Granddaughter of the original Rudolph and his once best friend, childhood sweetheart, lover, and erstwhile “Woman Who Shall Be the Next Mrs. Claus.” And when Nick screwed up, well, he did a bang up job of it. As in, banging Ginger Snaps, an Elf, in Nick and Rudi’s bed. Rudi left, brokenhearted, and cut all ties to the North Pole. Even Santa can no longer find her!

Rudi has made a life for herself with the Paranormal Protection Agency, where she and her partner, Darrick the Pixie, are considered the toughest team in the agency. Life isn’t like the Pole, but that rat-bas***d Claus can’t find her, so it’s all OK. Until it isn’t.

You see, someone ratted Rudi out. And now the King of Jerkdom in question is in her territory, interfering in her life once again. And yes, he really is an interfering jackass. Well, after what he did to Rudi, everyone at the Pole pretty much hates his guts, and even Mr. Self-Centered Jerk comes to realize that maybe he really is the rude, unbearable jerk everyone sees him as. But can he convince Rudi that he has changed?

Rude. Overbearing. Obnoxious. Check, check and check. Oh, and did I mention manipulative as stink? Pretty much. Maybe he has changed. Maybe he hasn’t. But Rudi has other things to worry about, like a gang of murderous robbers laying waste to Santa Grottos in shopping malls, and she really has no interest in letting Cheater McCheatersanta back in her life. And if her boss, Iliona, forces the issue, maybe she should just quit?

Nah. She’s not letting some bloody Santa wreck the life she has worked so hard to gain since leaving his spoiled rotten backside in the dirt.

This one was just OK. I didn’t like how a strong character like Rudi was so wishy-washy, and, well, IMO she could have done a lot better than Nick – no matter how he claimed to be a ‘changed elf’. Nick is pretty much as described, and a bully on top of that. Meh. Not one of Mina’s better installments, but not so bad I wanted to strike her off my ‘relaxation reads’ list. The ending was pretty cute, I will give her that.