1I have always heard thing about Benefil being seriously unhealthy for pets. Now, a massive Recall proves it.

Nestlé Purina has issued a voluntary recall of select wet dog food sold in 10-oz. plastic tubs due to possible issues with the level of vitamins and minerals in the food.

This Purina dog food recall only involves the following brands with both a “Best Before” date range of June 2017 to August 2017 and production code range starting with the first four digits of 5363 to 6054.

I haven’t been posting – too much to do in December! But here is something that makes me smile… 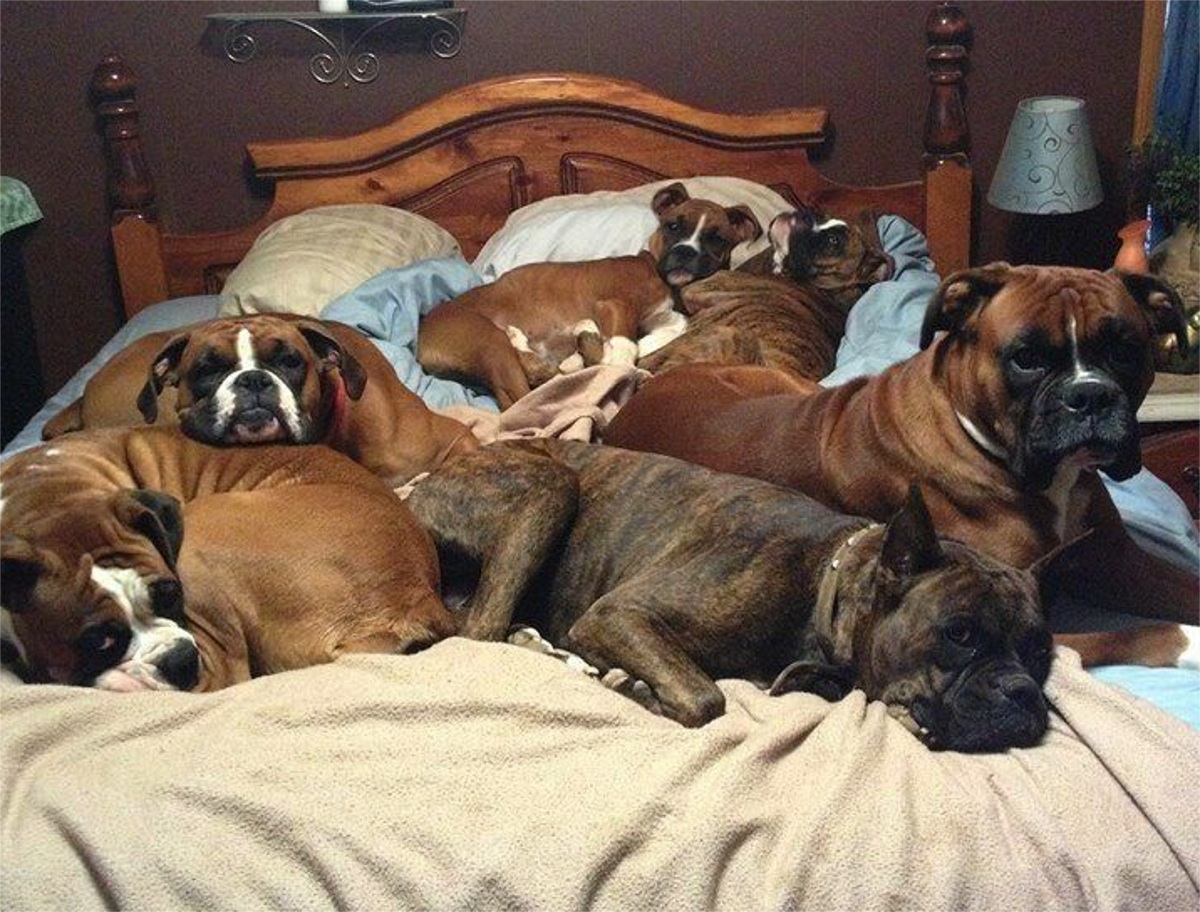 Speaking of Boxers – her name is Babito now. I tried out a lot of names, but she immediately responded to Babito. She is eating, putting on a tiny bit of weight, but being so thin, it will take time. But she is happy, as you can see here, so that works!

Give A WOLF For Christmas (Or A PACK!)

Give a truly meaningful gift for the holidays!

Another tie? Slippers, robe, sauce pan? Sigh. How about giving something truly meaningful for the holidays?

Adopt a Wolf! Or even a Pack of Wolves!

You will receive a plushy wolf to snuggle and a personalized certificate of adoption, as well as a photo of your wolf (or pack) and a fact sheet about him or her. What an AWESOME gift!!

Threats to the Future of Wolves

Wolves play an important role in keeping ecosystems healthy. They help keep large populations of animals like deer and elk in check, which benefits many other plant and animal species. Despite their value to the landscape, humans still threaten wolves across much of the U.S. with extreme intolerance and unsustainable hunting.

How Your Adoption Helps Wolves

Your adoption supports Defenders’ work to fight anti–wolf extremism on the ground and ensure a lasting future for wolves in their natural homes. We also advocate for better protection of wolves, and continuing restoration throughout suitable habitat across the United States.

All donations support our work to protect and restore the wildlife and wild places you care about.

How Your Adoption Helps to Protect Species and Habitats

Named “America’s Best Wildlife Charity” by Reader’s Digest, Defenders of Wildlife has been a leading innovator in developing the most effective ways to conserve imperiled wildlife and wild lands for over 65 years. Your adoption donation will immediately be put to use where it is most needed to achieve these goals.

Fond of another breed of wildlife?

CLICK HERE to adopt one (or more!!) of these breeds! Or be a true wildlife savior and order the “Animal of the Month”!

Why not gift our Mother Earth this year?

A Spot of Light and Hope For Humanity

U.S. puts an end to all experiments on chimps

After decades of testing, agency says 50 remaining chimps will be retired to a sanctuary.

Chimpanzees are the primate most closely related to humans, sharing about 99 percent of our DNA. (Photo: John/flickr)

The National Institutes of Health is shuttering its chimpanzee research program after decades of experimentation and research that has put animal rights activists and scientists at odds.

Two years after sending more than 300 of its research champs into retirement, the NIH said on Wednesday that it will place the final 50 chimps into sanctuary. The move puts an end to government-led experiments on chimpanzees, the primate most closely related to humans. Chimp DNA is nearly 99 percent identical to human DNA.

“It’s time to say we’ve reached the point in the U.S. where invasive research on chimpanzees is no longer something that makes sense,” Dr. Francis Collins, director of NIH, told the Associated Press.

The news was heralded by animal rights groups. “We really see the [NIH] closing and locking the door behind the chimps and throwing away the key on their way out of the laboratories,” Wayne Pacelle, president and CEO of The Humane Society of the United States, wrote in a blog post.

RELATED: 9 of the smartest animals on Earth

The NIH first established primate research facilities in 1960. But in the past few years, under increasing outside pressure, the agency had scaled back its work. In 2013, the NIH retired all but 50 chimps, hanging on to them in case they were needed for some essential research.

But in the past nearly three years, not a single request for research on a chimp has been made. “[W]e have moved on from the time when research on chimpanzees was considered essential,” Collins told the journal Nature.

Wednesday’s news did not come without some backlash. Some scientists working on a vaccine to protect chimps in the wild from the Ebola virus decried the decision. Others wondered if some future health crisis would be worsened without chimps available for testing.

The final decision by the NIH was not made without some arm-twisting and years of bureaucratic machinations. The NIH asked the Institute of Medicine (now the National Academy of Medicine) to look at the need for chimp research back in 2010, and the IOM came back with a report in 2011 that determined most of it was unnecessary. That led to the retirement of hundreds of chimps in 2013.

Then in June, the U.S. Fish and Wildlife Service classified captive chimps in the U.S. as an endangered species, so any experiments on the remaining 50 chimps would have had to been OK’d by that agency.

Now, the NIH will spend the next couple of years relocating the chimps from facilities in Texas. Most, if not all of them, will end up in a 200-acre federal chimpanzee sanctuary in Keithville, Louisiana, called Chimp Haven. (If you haven’t watched the video below of chimps exploring their new environment at Chimp Haven — literally stepping on grass and seeing the sky for the first time in their lives — it’s worth a watch.)

The 50 chimps, now housed in facilities throughout Texas, are not the only ones that will eventually need homes. More than 150 other chimps, supported by the NIH but not owned by the government, will need to be relocated, according to Nature. And there are more chimps out there that need a home, the Humane Society’s Pacelle said in his blog post.

“Approximately 700 chimpanzees remain in laboratories with around 300 owned by the federal government.” he wrote. “But we are working on travel plans for every one of them … The HSUS stands ready to work with stakeholders, including the government, Chimp Haven and other sanctuaries, laboratories, the public, and other animal protection groups, to ensure all chimpanzees are retired to high-quality sanctuaries.”

AWW! Look at these Black Footed Kittens at the Philadelphia Zoo~!

Soo cute! I am not doing reviews right now, too busy, but I saw this and couldn’t resist sharing. Back soon to reviews!

The kittens were born to mom Aza on April 8. The two boys are named Drogon and Viserion, and their sister is Rhaegal. They’re the first of the small African wild cat species to be born at the zoo.

And while we are being cute and adorable, here are a few of the babies born to zoos in 2014. To see more, click here!

An increasingly rare white rhino born at The Wilds in Ohio.

In this May 27, 2015 photo provided by the Wildlife Conservation Society, a southern pudu fawn walks in its enclosure at the Queens Zoo in New York. The male southern pudu fawn, the world’s smallest deer species, was born May 12 at the Queens Zoo. Southern pudus tend to be around a foot tall at the shoulder. When they’re born, they’re only 6 inches high, and weigh less than a pound. (Julie Larsen Maher/Wildlife Conservation Society via AP)

See – told you there was cuteness enclosed!!!

I was planning to take a hot bath, but how could I consider moving my lap warmer?

Koda Went To The Groomer Today!

He is one wore out pup! But he looks Soooo Cute!

And the Groomer’s dog is ROCKIN’ the Hot Pink Do! Pretty sexy for a 13-year-old!

While I was doing my FreeKibble entries for today, I came across this article by Caroline Golon on the Halo Purely For Pets website (#HaloFeeditForward). Since it is Easter, I thought something a bit uplifting would be nice. Enjoy the article and the Youtube Video!

Tumbelina is a sweet black cat rescued from a high kill shelter by Valley Cats, Inc. in Woodland Hills, Calif. But she is different than other cats they’ve rescued.

According to a Pet Collective video, this sweet kitten was born with cerebellar hypoplasia, and cannot walk on her own. “She is a brilliant mind trapped in her body,” explains Yvette Berke, co-founder of Petopia Animal Rescue, which partners with Valley Cats. “She’s bright as a penny but her legs don’t know what to do.”

The Valley Cats and Petopia team knew that Tumbelina’s chances were slim at the shelter. “We knew when we saw her that we had to take her and give her the best shot at life she would have for as long as she would have it,” says Berke.

Together, Petopia and Valley Cats found a four-wheeled cart for Tumbelina. “She’s going to be a four-wheel drive cat,” says Berke.

Other than her physical challenges, Tumbelina is a smart, engaged and loving cat who loves to play. She doesn’t realize there’s anything different about her.

“She accepts who she is and thinks that’s perfectly fine,” says Debbie Regal, co-founder of Valley Cats. “ That’s what I love about her. It’s a lesson for humans.”