I’ve been busy…  I have this huge technical edit I have been working on which is keeping me up all hours of the night, so I’ve hardly been able to read at all. I woke in the middle of the morning (after working all night) and couldn’t sleep, so I grabbed my reader. I was going for the lighthearted story on the menu, and accidentally chose this book instead. I would have put it back and chosen the lighter book – but the first paragraph grabbed my attention and wouldn’t let it go. I was hooked.

“I’m not a killer. Or a savior. I’m just one person trying to repair the broken scales of justice one jagged crack at a time.”

All Good Deeds won a bronze medal for ‘mystery/thriller’ at the 2015 IPPY Awards. In my mind, she deserved a gold medal. And a big gold medal from the whole freakin’ country for pushing this horrific issue out there in a novel that broke my heart and made me want to hug Stacy Green for being such a courageous woman.

And now, back to our regularly scheduled review. 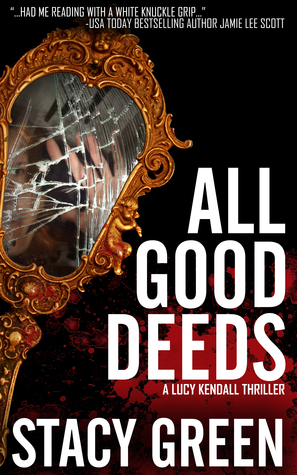 Lucy Kendall is a lot of things. Daughter of a self-absorbed mother. Younger sister to a suicide. Child Protective (Gack! Choke. Gag.) Services ex-employee. Private Investigator. Serial killer. And for the last one, more than anything else, Lucy Kendall is my hero.

You see, Lucy Kendall kills pedophiles. Pedophiles who have been run through the system, over and over, and gotten away with it. Who are still doing it. You see, pedophiles cannot be cured. Not gonna happen. For you see, pedophiles don’t think they are doing anything wrong. So, they destroy lives, souls. They rape and maim and destroy, and feel themselves justified. “Perhaps he felt he was born this way, or that he was entitled. But I doubted he spent hours agonizing over his choices. That’s not how his mind was geared.”

These are the people Lucy Kendall kills.

I cannot truly enunciate just how deeply I felt about this book. I loved it. True, Lucy is viciously torn about the work she does, no matter that she knows what she does is the right thing. The “system” certainly isn’t going to do anything about the monsters who creep through the dark. And with the advent of the Dark Web, well, being a pedophile is easier than it has ever been. Lucy knows that she can’t stop them all. But she can do her bit, no matter how small, to clean house in Philadelphia.

“There are very few people who are going to look into the mirror and say, ‘that person I see is a savage monster;’ instead, they make up some construction that justifies what they do.” – Norm Chomsky

Lucy gave up when the young boy who she tried to keep in prison after he raped and slaughtered a little girl was released. He didn’t even have to register as a sex offender. He simply walked away, scot-free. Free to move into a neighborhood where children abound.

And now, little Kailey Richardson is missing. And things become more complicated, more horrific, than even Lucy can comprehend. Things fall apart. The center does not hold. And the more they fall apart, the more the flow of the past and the future blend and merge into whole new horrors.

Again, this book absolutely blew me away. In a small way, because I was abused as a child as well. But my abuse was mild compared to the horrors children these days are forced to endure. The fact that humans can do the things they do to children pretty much guarantees, to my mind, that there is no ‘god figure.’ If there is, the sick SOB is one twisted piece of work. And Lucy puts it well when she talks about death.

“It’s the nothingness. . . Whenever life ends, it just quits. We literally cease to exist. Every single one of us. . . . There’s no blackness, no tunnel, no sinking into oblivion. It’s literally nothing.”

Lucy watched it happen. Watched the light go out. And felt the emptiness after. And, if they aren’t going to suffer in a Christian hell, well, Lucy will see that they suffer before the light goes out of their eyes. You GO, Girl!!!

Argh. Every time I think about the children out there, the ones who wind up in dumpsters or shallow graves, I despair. Especially when our police and courts can’t do a blasted thing about it. When eyes and minds are closed to the issue. Closing your eyes, sticking your fingers in your ears, and going “La la la” isn’t going to make it go away. The one who sticks in my mind the most, who still gives me nightmares, is the little boy my police department found tied under a bedroom sink, battered, bleeding from brutal beatings and rapes, who had his penis wired off to keep it hard. He had been licking the dirt off the floor in an attempt to feed himself. Believe me, Lucy is doing a community service.

There are several books in this series about Lucy, the people who help her, and the cop who, well, read the darn book already!!! Then read the next, and the next. And maybe go volunteer for your local shelter. Maybe you too can save a child from a pedophile?

Anyone who cannot come to terms with his life while he is alive needs one hand to ward off a little his despair over his fate… but with his other hand he can note down what he sees among the ruins. – Franz Kafka

Truth is everybody is going to hurt you: you just gotta find the ones worth suffering for. – Bob Marley

Sweet Deception. It sounds like one of those “Boy meets girl. Boy saves girl from minor problem. They all live HEA. The end.”

I wonder who decided on that title? Because, though there are six five star and one four star very-well-deserved reviews, the people who are expecting a simplistic story are going to be disappointed, and the readers who would pick up a powerful, contemporary suspense/thriller would not normally pick it up offhand. And this is a powerful book. Oh, the whole HEA romance thing is in there – though it might have been better served in another novel. Just my opinion, because I found that it distracted from the overall story line.

Ally Thompson’s life is boring. Go to work in insurance claims, come home, have dinner, pour a glass of wine and read a book in bed. (Hey, that is my life!) Tired of listening to all the fun that her coworkers had over the weekend on Monday mornings, she decides it is time to do something adventurous. Well, not too adventurous, but riding a roller coaster is a start, right? Ensconced in the “special” seat at the rear of the coaster she finds herself seated next to (of course) tall blond and sexy detective “Surfer Dude”. When one of the riders is murdered and thrown from the car, Greg the Surfer Dude saves her life (of course) and thus begins a much more serious contemporary tale than I had expected based on the cover and title. In a word, this is one thrilling book – but it is also excruciatingly current in what is, to me, the best sort of way. Angel Nicholas rips the blinders off of modern issues that many would like to ignore – or pretend don’t exist in the first place.

Drug running, human trafficking, sex trafficking, dirty cops – all play a gut wrenching role in the tale. And this is why I would have been happier with the book if it left out Ally pining over Mr. “I’m too gutless to have a real relationship but I am more than happy to bang you blind – and if you try to have a relationship with anyone else I will stalk you and show up on your doorstep” Guy. Yeah, yeah, he finally “comes around” several months after the end of the ‘action’ – and yeah, yeah, she takes him back. Meh. It detracts from the importance of the book itself as it tries to pull in both the romance and the suspense crowd.

The person expecting a ‘sweet’ romance isn’t going to like this. There is brutality, rape, sex slavery of both adult women and children, (two instances of which Ally is forced to watch, as “training”), and several scenes where the heroine is subjected to the worst kinds of humiliation, though she is not actually raped.

Yes, yes, I know. I get psychotic over books that depict rape and sadism – but my problems with those books are where the actions are presented as being “acceptable”. This isn’t that sort of book. It brings into the light things that society would rather keep hidden, stripping off the blinders and making the reader truly see.

Something else it brings to light? How our government will allow these things to continue to happen as they “build their case” – no matter the suffering that women and children go through as the “case” is built. Sometimes YEARS of torture, rape and sometimes death – which can honestly be a blessing given what they are subjected to day after day. All enslaved  by monsters, of course. But the real monsters? The ones who live next door – who have wives and children and jobs, who attend PTA and host cookouts in the back yard and birthday parties for your children. And who slip away at odd hours to rape and brutalize women – and of course, children the same age or younger than their own little ones.
/
So. My recommendation? READ. THIS. BOOK. But don’t expect “sweet and cuddly.” Expect realism, expect truth, expect good writing (well, except for the romance part – IMO Ally would have been better off sticking with being the strong, wonderful woman she was, and she does create something truly wonderful with her life before Greg comes back around) than sticking around for Mr. “It’s All About Me” but there was finally a HEA so those that wanted it got a sweet ending.

I received this book from the publisher in exchange for a realistic review. All thoughts are my own, and I am very happy to recommend it! If you like my reviews, please let me know on your country’s Amazon.com! I post to US, CA, AU, UK.

Copper Sun by Sharon M. Draper – And Other Stuff

I owe everyone an apology, as this book was on the Audible Daily Deal today, and I missed getting it posted. Bad Leiah! No Biscuit!

It’s been a hard week for me – not an excuse, just an explanation. My HiJinx is going downhill. Well, she is nearly 12, which is amazing for a Boxer –

they usually hit about 10 and simply fade away. So I have been lucky – but with so much loss lately I find myself hanging on to her. So, sleep has been a matter of a few minutes here and there so that she doesn’t slip away while I sleep. Selfish, I know. But my housemate was home today, so I slept for hours on end knowing she would wake me if anything happens.

So, Back to Copper Sun. This looks like a really terrific listen. It actually caught my attention more than some because of what is going on in “the world today. Americans seem to have a built-in filter – a filter which wipes their brains of the fact that, while we kick and scream and come off all “Holier-than-Thou” when it comes to the “we are perfect when it comes to human rights” scenario. We aren’t, and we never were. Slaughter of the Native Americans, Slavery, our history is checkered, to say the least. Even today, slavery is rampant – though now it is white women and children who are the victims in massive sex trafficking rings.