“It’s hard to tell who has your back, from who has it long enough just to stab you in it….”
― Nicole Richie

“Your perspective on life comes from the cage you were held captive in.”
― Shannon L. Alder 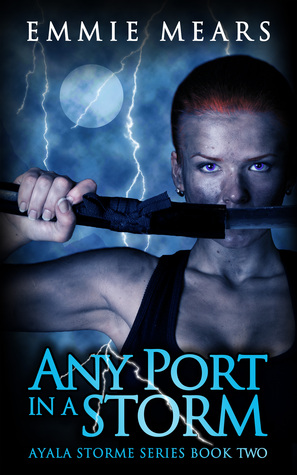 There are monsters in Ayala Storme’s world. Real, live honest-to-goddess monsters from the six and a half hells, crawling out into the night to eat your cats, your dogs. Your children. You. And it is Ayala’s, and the other Mediator’s, job to stop that from happening. Oh, they can’t actually stop the demons from crawling through holes in the veils between worlds, but up until recently they have done a pretty good job of keeping the balance between dark and light. But then? Well, let’s just say, everything went to the six and a half hells in a handbasket. For Ayala, Ben and Ripper watched the birthing of a new kind of demon. A demon who ripped into the world in true Ellen Ripley “Alien” fashion, out of the body of the young girl they were trying to track down and save.

But the thing is, you see, that the “demons” born in this fashion aren’t really demons at all, not all of them at least. For they remember. They remember the hopes and dreams of the women (and men) who bore them, and died to bring them into the world. Ayala and the Mediators slaughtered many of them. Then, something happened. One of them saved Ayala’s life. And now, her whole understanding of her life, and her place in the world, has changed.

The pain, the confusion. It would send a lesser woman mad. But Ayala, for all it hurts, has the strength to get past that. To reach for something better. To stand up for what is right and good, and do what she can to protect those under her care. Even if they are a bit “different” from the norms.

“Any Port in a Storm” picks up a couple of months after “Storm in a Teacup” left off. And for all the issues in the Summit, the Mediator headquarters, that were brewing then, now things balance on a razor’s edge. Ayala has no idea who she can trust. And even those she has trusted the most from the time she was tiny, from the time when her first sword was thrust into her tiny fist at age three . . . can even they be trusted any longer? And then, outside of the political machinations, something Wicked definitely comes slouching into the world from the demon hells. For, instead of single demons minding their own business, staying away from groups of norms and picking off the outliers, they are grouping together. Snorbits and Rakaths, Slummoths and Harkast and Jeelings (Oh, My!) are working together. And when one looks at Ayala – looks at Ayala and smiles – well, let’s just say the hell-hole they are pouring out of, and the fact that Ayala was set-up to face a whole horde of them alone, dumps her right down a savage Alice’s twisted rabbit hole. And while there be monsters there . . . well, these monsters are human. And if she is going to save herself, the Shades under her protection, and possibly the whole of Tennessee from the same fate suffered by Mississippi, Alabama, and huge chunks of Louisiana and Arkansas, i.e., becoming uninhabitable hell swamps where no human survived, she is going to need friends. And she is going to need answers to the unanswerable. Fast.

SiaT is just as good as APiaS, and Ayala is just as strong and fragile, smart and caring, broken and focused as she was in the last book. She isn’t perfect, but she doesn’t pretend to be. Her goal is, and has always been, to protect those under her care. And when betrayal of the worst kind drapes her in unyielding misery, well, she just keeps right on swinging her sword, doing the right thing no matter the cost, trying to save the world. Or, at least her little part of it. She may be a prisoner, in a way, of her birthright. She may not like it. But she won’t turn her back on what is right. And for that? Well, for that I added Emmie Mears to my “gotta read, and read right now” list. Downloading the next, “Taken By Storm” in a few. The one after, “Eye of the Storm” comes out this year (not sure when) but I will be downloading that one right away as well. I truly admire Ayala. She is strong without being a “Wonder Woman” character, mentally, physically and emotionally. She questions herself, but never allows her questioning to stop her from doing what she knows is right. A rare thing, and worth encouraging.

THE GIVEAWAY HAS BEEN EXTENDED TO MARCH 16, SO GET YOUR ENTRIES IN!

It’s time for a BOOK GIVEAWAY!!

J. K. Walker has been kind enough to offer copies of his wonderful books from the Salt Lake After Dark Series.

And just think – there will be MORE THAN ONE WINNER!!!

J. K. will be giving away all three novels in paperback – signed editions!

There will be THREE (yes, THREE!) copies of the current boxed set in either mobi or epub.

There are FIVE signed copies of Glacial Eyes in either mobi or epub. This is STRONG Urban Fantasy, as I have bragged on multiple occasions. You can check out the website for my reviews:

In order to win, click on the link below for the Rafflecopter page and complete. Then please comment below. I will need your information: email address and whether you would like mobi or pdf files if you win.  Please remember to include your email address!

It’s time for a BOOK GIVEAWAY!!

J. K. Walker has been kind enough to offer copies of his wonderful books from the Salt Lake After Dark Series.

And just think – there will be MORE THAN ONE WINNER!!!

J. K. will be giving away all three novels in paperback – signed editions!

There will be THREE (yes, THREE!) copies of the current boxed set in either mobi or epub.

There are FIVE signed copies of Glacial Eyes in either mobi or epub. This is STRONG Urban Fantasy, as I have bragged on multiple occasions. You can check out the website for my reviews:

In order to win, click on the link below for the Rafflecopter page and complete. Then please comment below. I will need your information: email address and whether you would like mobi or pdf files if you win.  Please remember to include your email address!

Christine Warren’s Heart of Stone came to me through Netgalley.com, with a request for interview. Honestly, what drew it to me was the “gargoyle” theme, as gargoyles have been an obsession for me since I was a child. Honestly, the main character in the book, Kees (pronounced like ‘peace’)  is not a true “gargoyle” but is instead a “grotesque,” a gargoyle-like character which was designed for protection rather than the movement of water along the gutters of ancient French rooftops. And protector he is. Kees and his six brothers were called centuries ago to protect humanity from The Darkness, an ancient evil that even the Light of the Universe cannot overcome.

Ella Harrow, on the other hand, is definitely not a protector in her present standing. Instead, she is a quiet, reserved, and introverted museum docent who would rather walk over hot coals than interact with people. She isn’t just shy – she is terrified of people and crowds. I love Ella. Absolutely love her. She is quiet and shy, and more damaged than anyone would ever understand. She has horrors in her background – horrors which she can never allow to be known.

Tonight, Ella has suffered through the quarterly fundraiser, and is more than ready to go home and curl up in her apartment, her ‘Fortress of Solitude,’ and forget all about having to interact with all the museum contributors. However, Ella’s life is about to change, and change drastically. No longer will she be able to run and hide, to shy away . . . for there are people, and creatures, after her. And only the statue, a grotesque come to life, will be able to help her to reach her true potential. If she lives long enough.

I hadn’t realized that I had read any of Christine Warren’s works before. I once read part of On The Prowl and hadn’t remembered it. That particular book didn’t impress me at all – in fact, I gave it a 1-star rating on Amazon. I actually called it another poorly written, poorly conceptualized bomb of a book and I still stand by that review. To say that the lead female character was spineless and embarrassingly stupid was an understatement. I am glad I didn’t remember that book before I picked this one up or I wouldn’t have read it. This female character is much more self actualized and better written. Overall, this book, the first of a projected series, was worth the time I took to read it, and I will be watching for the next volume.

The Netgalley copy that I received was an unedited volume with extensive errors that I am hoping were corrected in the final volume which was published in December 2013.