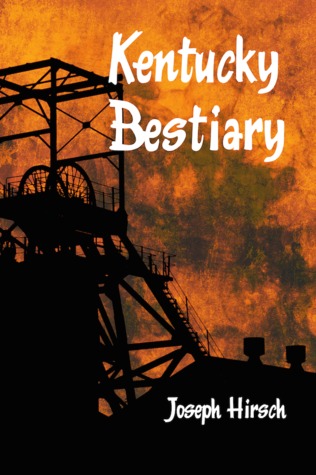 Show me a hero, and I will write you a tragedy. – F. Scott Fitzgerald

Try the devil, though I didn’t double cross him. I pledged allegiance. – Billy Wilkes, Kentucky Bestiary

“Hero” is such an odd word. Is a hero only that person who makes the grand and often fatal gesture? Or can a hero be a simple cop, tired, worn by the pain, the depression, the idiocy of humanity? And when do the horrors of life lead to the horrors of madness?

But the change he expected when he moves back to the ‘hollers’ of Eastern Kentucky – calm, peace, a speeding ticket now and again, is not what he finds. Instead, meth-heads and murder are the acts of the day, and reality takes a curve to the depths of despair and revulsion, of mystifying dreams and horrors of the mind and soul.

“Do you know where the cave led before it got blown?” Pete imagined it leading to the adyta where saurian-headed lizard men sacrificed virgins on an alter with bas relief carvings of some Sumerian forebear of Beelzebub sculpted into its stone, the monsters salivating for blood. It had been a long night.

Kentucky Bestiary is an oddity. Beginning as a quite well written police procedural, it blends and flows into a story of horror and myth, of Appalachian life. The horrors of monsters blend seamlessly with the horrors of the history of the mountains, the coal mines and the monstrous men who ran them, who worked children till their fingers bled, their lungs collapsed, their lives lived in the chthonic darkness of the miles and miles of tunnels, filled with not only darkness, but the terrors of cave-ins; of haints and hoodoos, and things that go bump in the night.

The threads of history flow through the book – Vietnam plays a role in the story of Pete’s uncle, the Veteran. But the history of the superstitions of the immigrants who populate the area is a stronger thread. Cryptozoology to snake handling, Pentecostals to Native American legend. The horrors of modern day meth heads, excruciating poverty and the hand-to-mouth lives of people with no hope living amongst rich tourists and a mysterious billionaire with a mysterious past, and an even more mysterious present.

The carrion’s gray coat stretched above them and gave off a faint animal musk, the beak of the preserved vulture’s head shadowing them like the canopy shrouding a massive dark Yggdrasil tree.

This is a very different sort of book. If you are looking for straight police procedural, you aren’t going to find it here. But if you are looking for something unusual, odd, and very deeply scary, a mind trip far from the usual, this is one to check out. Just don’t do it right before bed . . .

I received this book from the publisher in return for a realistic review. All thoughts are my own.

What my research told me is that a psychopath cannot change. You’re born like that. – Jeff Lindsay

It was just supposed to kill the poor. Isn’t it ironic that the leeches of society turned into leeches in reality? – Charles Graham IV, Psychopath

Many of the books I have read lately have the same underlying message – the depredation of the poor by the rich – the rich, with a total lack of anything even approaching morality or ethics, a disintegration of the soul. Xenophobia, greed, and a total lack of conscience. As Albert Einstein once said, “We shall require a substantially new manner of thinking if mankind is to survive.”

Raven’s Blood takes this ideation and stretches and molds it, utilizing the beauty and creativity of the Fantasy genre to build a world both unusual and horrifying.

It is always hard for me when I find a book that totally enthralls me to draw a line between raving about the story, the characters, and the world building, and just flat giving away the story. So, here I go, and hopefully I will totally intrigue you without blowing the story!

In a world with a striking resemblance to today, a madman – a madman with wealth, connections, and power – has a plan. A plan that, if successful, will result in the death of millions. Millions of “normal” people, the working class, the poor, all who are not of the privileged rich. Of course, they will keep a “few” of the unwanted poor. Someone does have to take out the trash, right?

Only things don’t work out as Charles Graham IV, his father and small circle of friends expect. For the poor may die by the hundreds of thousands. But they don’t stay dead for long . . .

One hundred years later, America is no longer what it once was. Instead, it is a land of compounds and fenced communities, fear and danger and death. For the ones who came back are undying – and they want blood. And my favorite part is, this is not just another of the ubiquitous zombie novels so prevalent in fantasy today. No, these are vampires, vampires created by the injection of what comes to be called the “Moon Virus,” a virus developed by the Graham Pharmaceutical Corporation specifically to kill the poor.

This is one of the better depictions of vampires I have read. Cassandra Lawson has put much more thought and attention into her vampires, and her efforts are not wasted. Instead, in a world of UF vampires that verges on the boring, (come on, sparkles?) Lawson has developed a well-thought-out story of not only mindless killing machines, the “Turned,” but also the “Born Vampires.” While the Turned are mindless killers, Born are much as they were – only now with fangs, and a requirement for blood.

Raven is a half-wood nymph, half human who has known much pain and tremendous loss in her life. She witnessed the death of her mother at the hands of the Turned when she was still a child. Taken in my her human father, Raven comes to care for the humans who surround her, taking on the responsibility for a divergent group of human children, raising them as her own family.

Captured by a group of Borns during a raid for medical supplies, Raven throws herself on the mercy their leader in order to save her children. What happens next is an impressively well written story of personal growth and change and a dystopian novel which even a non-dystopian-lover like myself dove into with both feet and didn’t come up for air until the book was, much to my disappointment, complete.

There is a strong paranormal romance aspect to the book, which turned out to be a lot of fun, though the sociological and adventure aspects of the book were what truly inspired my love of the book. I am hoping for a second book featuring this interesting world.

While rationalism at the individual level is a plea for more personal autonomy from cultural norms, at the social level it is often a claim- or arrogation- of power to stifle the autonomy of others. – Thomas Sowell

This book was provided to me in return for an honest review by the good people at storycartel.com. All comments are my own!

Review: Full Dark A Novel of the Hidden – Ty Lawrence

Full Dark by Ty Lawrence is not what I expected when the publisher first offered me a copy for review. In the modern supernatural world populated by fantasies of sexy vampires and alpha weres, Full Dark is entirely different in ways breathtaking, horrifying and deeply disturbing on a visceral level. This is a world of darkness, a Dante inspired fantasy of blood and death. In these pages, the dreams of the Dark Ages are born anew, brought forward into modern times. These are not the fangs of teenage dreams, nor the fur and claws of the ‘sexy wolf’. This is black blood and torn flesh, torture and enslavement and pain.

Ashlyn is a sorceress in a world that makes her a victim, her blood a narcotic to vampires. At a very young age her family is slaughtered and she is taken from her home to be savaged by a group of feral vampires. Rescued by the Master Vampire Brennan she is still a captive, kept for her addictive blood. But at least she is safe from the rouges who would keep her chained and savaged. Called The Hidden, the supernatural exist in a dark and dangerous world, hidden amongst the humans, who know nothing of their existence.

War is coming in this dark and hidden world. And while war foments Ashlyn has become a pawn of forces out of her control, forces who wish to use her, or hold her for their own. And the relationship between Ashlyn and Brennan becomes even more strained as Ashlyn strains against Brennan’s control, while knowing that her only safety is actually within his care. Further complicating matters is Lord Sorcerer Finn, a sorcerer of great and terrible power, who controls the Vox, the lands inhabited by the supernatural Hidden, who has his own agenda, and a strange and terrible control over Ashlyn.

This is a magnificent and terrible story. The characters are more than just well written. The reach out of the pages and pull you into their story, whether in hate or admiration, and often in both at the same time. Ashlyn herself tugged me in both directions. A victim for so long, she made me deeply sad one moment and furious the next. She is deeply scared, reaching for a life she will never have while turning her back on the one she might, a life of strength and control over her own fate. Desperate for a humanity that is not hers to have, she protects the police officer, Hayden, who has secrets of his own which will put him directly in the sights of Brennan. And in so doing, places herself in tremendous danger on his behalf.

This is a multilayered tale of power and depth that I would not wish to have missed. A tale of bitter and broken characters, of hate and pain, loss and death and the choices one must make to survive. And yet, through it all, there is a thread of love and warmth which can be found in the worst of situations. But can one learn to accept that love, and what will one do to protect those whom we love?