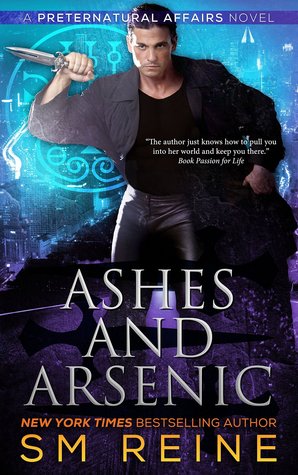 Greed is not a financial issue. It’s a heart issue. – Andy Stanley

Cesar Hawke isn’t really much of a witch in the eyes of his coworkers at the Office of Preternatural Affairs. I mean, come on – the guy has massive sneezing attacks when he comes in contact with magic – nothing like a witch being allergic to magic. And he is a potions witch, not a pumped up spell slinger. Well, he ‘is’ pumped up with strength spells every morning, but that is neither here nor there – after all, being the new aspis for his boss, Director Fritz Friederling (and you really should read the previous book where he was awarded that dubious honour) he needs every leg up he can get.

It has been a really bad couple of months for Cesar, Fritz, and the OPA. And things are about to get a lot worse – especially for Cesar. Because his black-sheep brother, Domingo, is up to his old tricks again. And this time? Well, let’s just say death and destruction is once again raining down on Los Angeles – and Domingo is right in the middle of it. Cesar and his grandfather, Pop, tried to save Domingo in the old days. But this time? Well, this time there may be no saving him – or any of those who surround Domingo. Including his family.

Once again S.M. Reine has written a book of beauty and power that is both creative and interesting on many levels. Not only the paranormal writing level, but in her interest in and understanding of the lengths that family will go to in order to protect their members. Even when the member in question doesn’t really deserve their support.

There are convolutions on top of convolutions in this newest book of the Preternatural Affairs series (This is book 6, you can enjoy this one without reading the others, but the whole series is so enjoyable there is no reason not to read them all!)

Hi everyone! My name is Sara, and I’m the New York Times Bestselling Author of urban fantasy known as SM Reine. I collect swords, cat hair, and typewriters (which I do use for writing!). You can usually find me writing on my treadmill desk at 2am whilst listening to dubstep. Yes, dubstep.

If you would like to know the instant I have a new book available, you should enlist in my Army of Evil! I’ll only email you when I have a new release, which is generally no more than once a month. I can’t write any faster than that. 🙂 http://smarturl.it/armyofevil

Anyone who follows my blog knows how much I like S.M. Reine. Well, here are some more wonderful books by one of my favorite authors!

When more than a dozen people die at a retirement home, the official story is carbon monoxide poisoning. Cèsar Hawke is convinced the reason is less mundane and more infernal. But that’s his job. As an agent working for the Office of Preternatural Affairs, he’s always looking for supernatural answers to deadly questions.

Isobel Stonecrow agrees to help him find the truth. With her powers of necrocognition, she can speak to the dead and get the real story.

But when they return to the crime scene, they find a lot more than cadavers. They find a nightmare that they can’t escape—a nightmare from Isobel’s past, which even she can’t completely remember thanks to the contract that signed away her soul.

Cèsar will have to disinter Isobel’s secrets to save her. He’ll learn who Isobel used to be, what she’s done, and the price she paid…no matter how deadly the knowledge might be.

Cèsar Hawke is a witch with the Office of Preternatural Affairs, a special agent in the division whose job is to get warrants, perform arrests, put the suspects on trial, and send guilty parties back to the Hell from whence they came with the travel forms filled out in triplicate.  Which is pretty funny, seeing as strong magic makes him sneeze. But hey, it’s a job, right?

But now, things have gone off all cockamamie – and Cèsar is now on the wrong end of the proverbial stick. He has found the body of his favorite waitress from The Olive Pit, his favorite bar, dead in his bathroom. He is the only suspect. And the OPA is more than willing to let him swing.

Escaping from ‘mundane’ jail is easy. Finding out who really killed Erin, the waitress, is much less so. And finding out why those who should have his back, his partners in the OPA, actually don’t is even more confusing. Hell of a night, huh?

Cèsar has no memory of what happened that night, but he does know that the gun on his coffee table isn’t his. And trying to prove his innocence is going to be terribly hard without his memory, and with the police arm of the OPA, The Union, hot on his heels with things like huge guns and graves in the desert on their ‘must do’ list.

In order to find out what happened that night, and to prove his innocence, Cèsar must find Isobel Stonecrow, a purported necrocognative, in order to raise the shadow of Erin. Only by doing so can he find out what really happened that night. And finding Stonecrow isn’t going to be easy. But then, finding out why The Union is out to kill him isn’t all that easy either.

If you haven’t read any of the Office of Preternatural Affairs books yet, you really should. They are creative, exciting, well, just plain awesome!

Highly recommended – you can start here if you like, but you can also enlist in the Army of Evil and read ALL of Sara’s books – they are fast paced action/fantasy novels sure to tickle your braincells!