“When she awoke, the world was on fire.” ― Scott Westerfeld, Uglies

“We all live in a house on fire, no fire department to call; no way out, just the upstairs window to look out of while the fire burns the house down with us trapped, locked in it.” ― Tennessee Williams, The Milk Train Doesn’t Stop Here Anymore

It really doesn’t smell like roast pork, you know. A burned human body, that is. There is just too much difference – a plain slab of pig flesh as compared to a blood filled human body. And Laurie Ann Dinterman knows that smell. Somewhere in the ruins of the former Pirate’s Cove Restaurant, someone has burned to death. Now, the question is not only who, but why.

As the only female officer in Mossy Bog, Laurie works harder, and longer, than anyone else in the department. She has to, if she is going to transfer out of a department where she gets no respect into the Sheriff’s Investigative Department. Finding the answer to the arson of the Pirate’s Cove, and the answer to why drifter James Brown (no relation) was inside the building when it burns may mean the difference between promotion and being stuck in Hillbilly Hell for another year.

Enter Georgia State Fire Investigator Wyatt North, a genuine, red blooded pain in the Police Chief’s ass. A PitA that the Chief is determined to dump on Laurie Ann – and if he gets so much as a hangnail, it will be not the Chief’s ass on the line, but Laurie Ann’s. Because North isn’t just the Fire Investigator. He is a Fire Investigator who had a breakdown when he lost his partner to a serial arsonist. Oh, and did he mention that the guy is also the much beloved nephew of the First Lady? Yep. Of the good ol’ US of A. Babysitting duty. Oy.

Maggie Toussaint has done a beautiful job with Hot Water. Her characters are believable, her setting well drawn, and her research/knowledge of how things run in a small department is spot-on. Believe me, I have been a woman in a small, backwater police department. It isn’t fun.

This is a romantic suspense novel, but unlike many stories Toussaint doesn’t overwhelm the “suspense” with the “romance”. This is a well-rounded story with a tight storyline and a heavy dose of edge-of-your-seat action, a bit of snark, and a few well interspersed laughs. Overall, a book I would recommend to both romance and suspense readers.

This is Book 2 of the Mossy Bog Series. I didn’t feel lost at all, even though I hadn’t read the first book. I hope you enjoy it. If you enjoyed my review, please say “yes” to my Amazon post. Thank you! 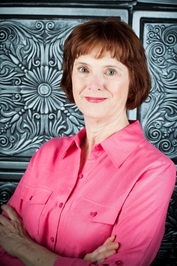 Her mystery titles include In For A Penny, On the Nickel, Death, Island Style, Murder in the Buff, Dime If I Know, and Gone and Done It.

Her works blend mystery and romance, often with a dash of humor.

Visit her at www.maggietoussaint.com and at her alter ego’s site www.rigelcarson.com