“Just really, really believe in what you’re trying to do. Don’t let people alter that. Let people advise you and lead you down paths to make smart business decisions. But trust your instinct and trust that overwhelming drive that made you put all your dreams and everything on the line.” – Luke Bryan

Magic of the Gargoyles
All Mika Stillwater wants to do is finish this finicky, delicate job, get paid, and maybe, just maybe, get some sleep. That doesn’t seem like such a huge request, does it? After all, if she can finish the delicate crystal vials for that grumpy, obnoxious healer apprentice Althea Stoneward, she will be that much closer to blowing off her dreary Jones and Sons Quarry job and opening her own shop. Just twelve little vials, and all of her dreams will have their true beginning.

Really. It wasn’t that much to ask.

However, if wishes were horses, beggars would ride. And Mika’s wishes are shattered, in more ways than one, when a baby gargoyle slams into her life. Literally. Now, Mika must decide between fulfilling her dreams or saving a clutch of baby gargoyles from true evil. What’s a girl to do? Why, saddle up and ride to the rescue!

I have been fortunate lately to read a few books that have impressed me in their portrayal of strong women characters, and this is one of them. Mika doesn’t have any illusions about her powers making her Superwoman. Instead, she is modest almost to a fault, realizing her boundaries and working hard to move herself beyond them. She is kind and honorable, willing to do what has to be done, even if it destroys her own dreams, just because it is right. Ms. Chastain’s world-building is beautifully wrought and believable within its context, and left me wanting to learn more about the world in which Mika lives. The characters are well drawn, and pace and context well designed. There is no ‘romance’ to the book, this is straight fantasy, and well worth the read. 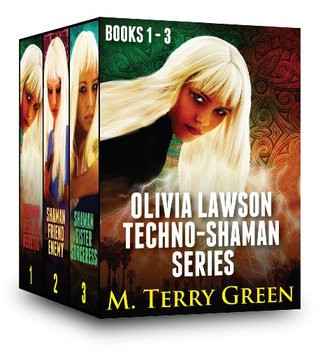 Get all THREE of the Olivia Lawson Techno-Shaman Series books for only .99!

I reviewed Shaman, Healer, Heretic (Olivia Lawson Techno-Shaman) as a freebie on Amazon and posted a review, which I copied for you below. I loved the first of the series. So, pick this three-book set up at .99 before it is gone!

What’s a Shaman have to do to catch a break, anyway? You haul butt around, all over LA, finding lost souls (literally) and nobody gives you a lick of respect. Ugh. As if slipping on the Techno goggles and hoping around the multiverse, looking for wandering souls was an easy thing to carry off!

Livvy is a Techno-Shaman, a Shaman who uses 3-D goggles combined with the technology of the “God Helmet”, which uses an electromagnetic field and shamanic symbols created with light and magnets in order to open the way into the multiverse of the middleworld – the entryway world where she meets her spirit helper, her guide through the middle and down into the Underworld, the land of the Spirits. The money isn’t all that good, but hey, it’s a living – even though you have to dodge the occasional religious fanatic or prejudiced A-hole. Only, suddenly, Techno-shamans are dieing. And Livvy isn’t sure that she won’t be next.

As more Shamans die, and the underworld becomes more and more dangerous to enter, Livvy works with S.K., the dwarf who acts as intermediary for the Los Angeles area Shamans, to gather together the Shamans in order to stop the deaths and changes in the middle and under worlds. But pulling together the secretive and isolationist Shamans into a working group is harder than one might think. And it soon appears that, even working together, it might be too late to stop the destruction of the multiverse, and possibly of all time and space.

Shaman, Healer, Heretic is a quirky sort of Urban Fantasy, set in the gritty and unhappy back alleys and hovels of Los Angeles. Seeped in multiple world views and superstitions, the author blends differing belief systems into a satisfying whole, making it one of the more creative books of it’s type that I have read recently.

I picked up my copy of M. Terry Green’s Shaman, Healer, Heretic (Olivia Lawson Techno-Shaman) as a freebie on Amazon. Grab a copy before they are all gone!

Reading order for the series:

Terry adores hearing from readers! You can reach her via terry (at) mterrygreen.com. She does all her own email stunts!