Review: Spirits, Stilettos and a Silver Bustier by Deanna Chase 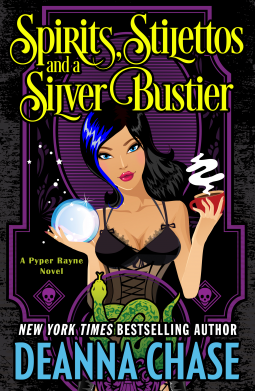 People tend to dwell more on negative things than on good things. So the mind then becomes obsessed with negative things, with judgments, guilt and anxiety produced by thoughts about the future and so on. – Eckhart Tolle

I keep going to the river to pray
‘Cause I need something that can wash out the pain
And at most
I’m sleeping all these demons away
But your ghost, the ghost of you
It keeps me awake – Ella Henderson – Ghost

I am a Deanna Chase junkie. There. I said it. Loud and proud, Baby! Her Jade Calhoun series, beginning with Haunted on Bourbon Street is an automatic ‘must buy’ for me. The books combine fantasy, humour, great characters and of course the spectacular New Orleans life into a treat for the reader.

We first met Pyper Rayne in Haunted when she was being terrorized by one of the nastiest ghosts you can imagine. Now, with Spirits, Stilettos, and a Silver Bustier Pyper gets her own series – (yes, that is me, dancing around the room and giggling. Get over it. 😉 )

Pyper’s life is working out pretty well, if she does say so herself. She owns her own coffee shop right next to the stripper bar where she used to work. Her friends are all safe (for now), she has good friends, and she is getting ready for a gallery showing of her body painting. Exciting! The only thing is – when she shops for a vintage dress for her gallery show, everything starts running off the rails. The shop owner ends up dead, and Pyper is the prime suspect. Add to that the ghostly voices coming from the walls, and the hot ghost who is following her around, and life is getting a lot less happy than it was just yesterday.

Spirits is a great new addition to the original series. Pyper was always one of my favorites of the Bourbon Street series, and the first book in her series does wonders for the character. We get to meet new characters, including a sexy ghost with highly unusual talents, the mystery is very well done as all Deanna’s mysteries are, and the setup for the next book is awesome. If you like your UF with a bit of mystery, not a lot of ‘over the top’ smexy, and a good deal of humour, this is a series you should try!

I receive this book from the publisher in exchange for a realistic review. Highly recommended.

Haunted on Bourbon Street (Jade Calhoun Series, Book 1)
By Deanna Chase
Jade loves her new apartment—until a ghost joins her in the shower. When empath Jade Calhoun moves into an apartment above a strip bar on Bourbon Street, she expects life to get interesting. What she doesn’t count on is making friends with an exotic dancer, attracting a powerful spirit, and developing feelings for Kane, her sexy…
Free!
Get It Now
June 19, 2014 2

Bring on the CHOCOLATE!!! Treasures, Demons, and Other Black Magic Cover Reveal!

Treasures, Demons, and Other Black Magic!

OH, yummy! Now I am going to have to go make rich, gooey DARK Chocolate cupcakes, then find my athame and have a party! Yippee, skippee, Rah Rah YUM!!!!

Meghan Ciana Doidge is an award-winning writer based out of Vancouver, British Columbia, Canada. She has a penchant for bloody love stories, superheroes, and the supernatural. She also has a thing for chocolate, potatoes, and sock yarn.

I can hardly wait! going to go back and give the first two a quick read so that I am prepared for the next!!

And don’t forget Meghan’s other wonderful books! These are new covers for the Dowser series, but her other works have great covers as well, and you can even see the old-style cover for Cupcakes below.

Shadows of Bourbon Street is here!!

Got the following from Deanna Chase a few minutes ago! Her Jade Calhoun Series is wonderful, and I have been waiting rather impatiently for the next in the series. Never fear, read on for more information and the links to purchase!

Hello,
I’m extremely excited to announce my newest release, SHADOWS OF BOURBON STREET, the fifth book in the Jade Calhoun series! (Book six is coming this winter!)
As a special treat there is a companion novel, MARKED BY TEMPTATION, a spin off Bourbon Street novel, that happens at the same time as Shadows of Bourbon Street available now in the Alphas After Dark anthology.
Buy links Shadows of Bourbon Street:
Amazon US
Amazon UK
Barnes and Noble
Kobo Coming soon!
iBooks Coming soon!
Buy links Marked by Temptation (In Alphas After Dark 9 book bundle)
Only 99 cents for a limited time!

Starting a new job is tough…especially when your boss thinks nothing of interrupting your wedding.

After a year of battling ghosts and demons, white witch Jade Calhoun is finally marrying the man of her dreams. Or is she? Minutes before Jade and Kane say I do, the High Angel arrives with a job for the newly appointed shadow walkers. Another witch’s life is on the line and it’s up to Jade and Kane to save her.

With a black magic user intent on destroying one of Jade’s friends, more demons on the loose, and a hard to find incubus, can the almost newlyweds save the witch and get their own happy ending?

USA Today bestselling author Deanna Chase brings you MARKED BY TEMPTATION, a novella set in the Jade Calhoun Bourbon Street world. Mati Ballintine is a sex witch looking for a hot one-night stand to bolster her power, and sexy Vaughn Paxton is cocky enough to make her work for it. But when their one night turns into more than they bargained for, one life is changed, another threatened, and suddenly there’s a whole lot more than lust at stake. (Coven Pointe #1)
Thanks for reading,
Deanna!
March 31, 2014 0

I first came across Deanna Chase in 2012 with her book Haunted on Bourbon Street. The book, featuring Jade Calhoun, was set in New Orleans and features Jade, an empath, and a creative and interesting group of friends, including a couple of strip club owners, a coven, and couple of ghosts with very different agendas. Since then, I happily enjoyed both Witches of Bourbon Street and Demons of Bourbon Street. There are still two more (that I know of) in the series that I have already purchased and are sitting in my TBR pile waiting for their turn. And I am very much looking forward to them.

Influential Magic is also set in New Orleans, and is the first in a series subtitled Crescent City Fae. This new series stars Willow Rhoswen, owner of The Fated Cupcake and part-time vampire hunter for the Void. Oh, and she is also a faery – complete with wings and flight capabilities. Well, when she isn’t around vampires, whose walking death drains her earth magic, and thus her life force. A very uncomfortable position to be in when your evil faery auntie, who is also the Director of the Void policing agency partners you with a vampire in order to investigate dastardly deeds by the local vampire corporation. Especially when that vampire happens to be your ‘used-to-be-human’ boyfriend. A boyfriend, who suddenly dumped you with a quick text message (jerk!), then turns up later turned – literally.

What happens to Willow in this volume of the Crescent City series is a neat bit of creative urban fantasy, but it also carries an undercurrent of politics and xenophobia which reflects what is happening in this world, this reality, even now. I am, admittedly, not a ‘vampire groupie’ as so many are these days. Been there, done that, would really like for that whole ‘cold, dead, walking corpses’ to be over already. I mean, come on – have you ever felt a real corpse? Gross. I couldn’t imagine kissing cold, dead lips, much less getting down and dirty with other parts! However, in Chase’s alternate universe, her vampires are, though still cold and walking dead, much more ‘real’ people than others in the genre, with lives and families whom they love – even if they are still overwhelmingly entitled, making them both vicious and brutally efficient killers when crossed.

Overall, I really liked Willow. She takes a lot of damage, both physically and emotionally in this first book, and overall she handles it well. I did find her rather naïve at times, railing against those who would take care of issues in a vigilante fashion, while openly acknowledging that the governmental agencies are deeply corrupt. At the same time, I honestly admired her for understanding the siren song of power and how it can so easily corrupt.

The fantasy storyline is creative, well written, and believable as an alternative reality of a world which evolved under magical conditions, while still aligning closely with our own. There is a bit of a triangle aspect, between Willow and David, the vamp ex boyfriend and Talisen, her childhood friend and mentor who is another faery. The triangle seems to correct itself at the end, and I honestly hope that the concept doesn’t carry on through the other books, as I find those sorts of story lines to be crutches for poor story development. However, the Shih Tzu that turns into a wolf? Awesome! And I hope that Willow will be spending more time in her bakery, creating magically infused cupcakes, and more time with her best friend, Phoebe, a witch. There were a lot of ends left free, leaving room for a great deal of really good story development as we learn more about Willow, her skills, and her family and friends. And having listened to the Audible Edition, narrated by Gabra Zackman, one of my favorite narrators of all time, there was a whole other level of enjoyment that I was able to gain from the book.  And right now, Influential Magic is only $1.99 for the Audible Edition! What’s not to like? Especially when it is also text-to-speech enabled for the Kindle edition. I prefer the Audible editions, as I can download them onto my Zune and pop it into my pocket while I am doing other things, but having it in both editions means I can read it any way I wish. Cool…