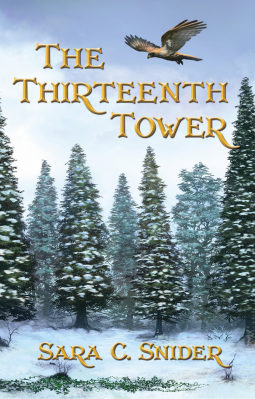 In adversity lies strength beyond imagining.

Abandoned as a baby, young Emelyn’s life as a housemaid in the quiet village of Fallow is unremarkable—and empty. That is, until a host of magical creatures arrives and inflicts terrible misdeeds on the townsfolk. Inexplicably immune to their enchantments, Emelyn joins a pair of Magi intent on stopping the cause of the trouble—and who claim to know of her parents, promising Emelyn answers to a lifetime of questions.

But the answers Emelyn seeks prove to be more elusive than she hoped, and the world outside Fallow more perilous than she imagined. Magical creatures roam the land over, attacking yet another town before coming after Emelyn. The key to her survival—and finding her family—lies deep within her, if only she can conquer her doubts and believe she is more powerful than she ever dreamed.

In a journey that explores facing one’s fears amidst the uncertainties of an unknown world, The Thirteenth Tower is a magical tale of discovery, growth, and of love’s enduring strength.

Whee!!! (Jumping up and down clapping hands like a five-year-old.) Golden Sunshine Locke, or Goldie Locke as she is better known, is my new favorite “Just For Fun” literary character! Well, anyone who owns two three-headed puppies, several cats, a fluffy zombie Silkie chicken named Fred, and Petunia the miniature pink elephant (well, actually pink mastodon, but that is just being picky) is my kind of girl! And did you know that several types of magical creatures all together are called a “Mayhem”? Again, Whee!

Goldie is an Earth witch, with two PhD’s, one in Zoology and one in Magical Ecosystems, and a law degree. Her job with the Baehr brothers is as one of the “most dreaded Magical environmental lawyers of all time.” Which is rather difficult when you are a five-foot blonde with a terminal case of “cute.” What is a girl to do except learn to be a Master Swordswoman and kick butt on a regular basis?

This is my first introduction to Elizabeth A. Reeves and her Baehrly series, but it certainly won’t be my last. In this edition, Goldie is stuck with an ‘Ordinary’ (non magical) police detective trying to solve the thefts and slaughter of numerous extremely endangered magical creatures. The story is extremely funny in parts, but also made me ache for the loss of such wonderful creatures in such a terrible manner. But, with her Ordinary partner, Donovan, her ex boyfriend Kodi Baehr, the youngest of the Baehr brothers and a total goof-off, and her awesome smart mouth, Goldie handles missing magical creatures, mystery, and mayhem galore.

All in all, I truly enjoyed this first new (to me) book in the series and greatly look forward to the next in the series, Baehrly Bitten.