Tomorrow Is Thanksgiving – Time To Change It To “Thinksgiving”?

Mohammed Zeyara posted this on Facebook this morning. First, you must realize I have no real idea who this person is, he is simply someone who wound up on my ‘following you’ list. Huh. A guy with over a million followers is following me-how cool is that?

Anyway, I was reading this, and it really hit home for me. My family on my mother’s side was Quapaw, a Native American Tribe. They were part of the “Great Removal” – the Cherokee Trail of Tears, (other tribes, including Choctaw and Quapaw were gathered up at the same time) carried out by the White Man, shoving us off our lands and into the barrens of Oklahoma onto “Reservations” (think the Japanese Prison Camps in the US during the World Wars).

I always think of this when “Thanksgiving” comes around. Needless to say, I am not a big fan of the holiday. Then I think of all the other atrocities in the world . . .

So, I wrote the following and posted it on Facebook. I think the concept is important enough that I am asking you to read it here. And maybe you will think about meeting my challenge?

A small body of determined spirits fired by an unquenchable faith in their mission can alter the course of history. – Mahatma Gandhi

Humans are, at base, savage beasts made more savage by their intellect – their ability to plan violence for reasons that have nothing to do with feeding their young or guarding their homes. They do it for power, glory, and wealth. Things a true “savage beast” would never consider. Animals kill for food and for the safety of their young and their family groups. Humans do it because they can.

At one time or another every human “group” – Native American, African, Catholic, Jew, Christian, Hispanic, Celtic, you name it, have all been the ‘target’ of the rest of the world. Oh, and must I mention gays, lesbians, and women? As long as humans are determined to make themselves “better” than other humans, for ANY REASON we won’t evolve beyond savages, no matter how much “better” we put ourselves forward as being than anyone else.

Here is just one example that brings me immense pain. “White Pride” groups tell Hispanics that they should get out of “Their” country – and yet, this was Hispanic/Native American land long before the white armies came in and overran their country. If White groups want everyone “other” to go home, shouldn’t they load up the boats and go back to Europe? This is simply an example, not a rant, just a point – – – NO ONE  is without guilt, and NOTHING in this world will become better until we all decide to look beyond skin colour, religion, sex, race, and all those other “reasons” for fomenting hatred.

Maybe, for this Holiday season, everyone should consider meeting a person they most fear, whether because of their skin colour, race, sexual orientation, whatever, I don’t care. And I encourage you to sit down with them over a cup of tea and really get to know the PERSON. Are you brave enough to do that? To face your fears and prejudices, to reach out with your mind and heart and learn? You may be surprised to learn just how similar you are….I have no great love for Christians, for many, many reasons, but that doesn’t keep me from considering a local minister a dear friend. We share a love of gardening, of food and books and many other things that have nothing to do with her religion and everything to do with her being a genuinely good person. I cherish the things we share, and honour the things we don’t. Maybe, one person at a time, we can learn to accept our differences? 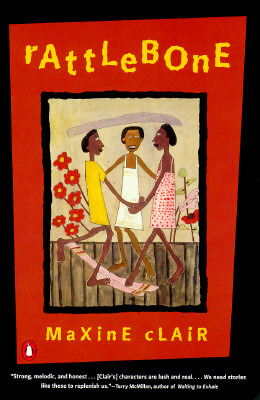 In Rattlebone, a “fictional” black community north of Kansas City, the smell of manure and bacon from Armour’s Packing House is everywhere; Shady Maurice’s roadhouse plays the latest jazz, the best eggs are sold by the Red Quanders, and gospel rules at the Strangers Rest Baptist Church. This is the black Midwest of the 1950s, when towns could count their white folks on one hand – the years before the civil rights movement came along and changed everything. In perfectly cadenced vernacular, Maxine Clair speaks to us through the voices of Rattlebone’s citizens: October Brown, the new schoolteacher with a camel’s walk and shoulder-padded, to-the-nines dresses; Irene Wilson, naive and wise, who must grapple with her parent’s failing marriage as she steps eagerly into adulthood; and Thomas Pemberton, owner of the local rooming house, an old man with a young heart. Sparkling with lyricism, Clair’s interconnected stories celebrate the natural beauty of the Midwest and the dignity and vitality of these most ordinary lives.

First, I have not read this book, but it does have good reviews, so I feel comfortable pointing it out. So there is that!  I noticed this book today, and after reading the description I knew I would enjoy it. The thing that catches my attention comes back to a discussion on Goodreads I was involved in for a while that bemoaned the fact there there is little really good writing extant that focuses on ‘other-than-white’ people. Then of course when I saw the part about ‘lyricism’ in writing, that caught my attention even more. I adore a lyrical voice in literature, being able to sink into a story and make it my word for a while. So, let me know what you think. I intend to enjoy this as soon as I get a moment!