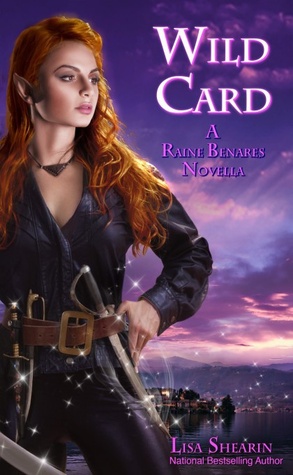 Not long ago I found Lisa Shearin through her SPI Files series books, The Grendel Affair and The Dragon Conspiracy. I enjoyed those books greatly, so nosed around to see if I thought I would like any of her other books as well. It made sense – if you like one series, you will in all likelihood enjoy the author’s other work as well. Looking at Lisa’s page on Goodreads, I noted that the first novella of the Raine Benares series, Wild Card (Raine Benares .05) was available, and was the perfect way to begin, especially as the audio is only $5.95. Besides, I like Eileen Stevens, the narrator, so I downloaded it from Audible to give the series a try.

I wasn’t disappointed. I like Raine. She is strong, though not overpoweringly so. While she is a magical elf, her magic isn’t of the “Blow them all up” type. Rather, she is a Seeker – she finds missing items, missing people, that sort of thing. Now, she has been asked to find the stolen jewels belonging to Lady Kaharit (listening on Audible means you can’t always know how things are spelled!) a high standing Goblin lady. Of course, who she is to steal them from is scary in its own right – and it leads to even scarier things very quickly.

Magic Lost, Trouble Found (Raine Benares 1) is playing on my tablet now! Oh, and the third in the SPI Series, The Brimstone Deception, is due out January 26, 2016 (Soooo Long!! :-() but I already have it on my “must have” list.

status. I adore anthologies, and with both Nalini Singh and Ilona Andrews as listed authors, I was so excited to receive it. There were two other authors in the anthology, Lisa Shearin and Milla Vane, neither of which I had read before.

This is why authors are brilliant to be involved in Anthologies, especially when they can be involved in them with more well-known authors. I may never have heard of Lisa Shearin before, but after reading Lucky Charms I knew I had to read more of her work.

It was four in the morning. I was in a stolen bakery delivery truck that’d been nearly totaled by three gargoyles. In the truck with me were two hung-over elves, a pair of stoned leprechauns with the munchies, a naked Russian werewolf, and a hot partner, who was actually more of a bodyguard, in a race against a goblin dark mage to retrieve a leprechaun prince with a tracking chip embedded in his left ass cheek.

What is NOT to love?!?! I immediately went out and purchased The Grendel Affair on Audible. Hey, it is narrated by Johanna Parker. The main character, Makenna Fraser, is a good-ole’ Southern girl, and Johanna’s southern voice is perfect for the character. Having first listened to Johanna in the Sookie Stackhouse Series, I follow her on Audible and give serious consideration to any books she narrates, just as I do with any books that are narrated by Renée Raudman, Khristine Hvam, Will Patton or . . . well, I have a list of narrators that I follow!

Makenna Fraser features in The Grendel Affair as well. Lucky Charms, the story in Night Shift seems to be a prologue to the SPI Files series. The second in the series, The Dragon Conspiracy (SPI Files), comes out January 27th, and I will be waiting impatiently for the Audible edition! I love the mythology of the SPI Files. A hidden paramilitary police force policing the supernaturals, which of course the human population knows nothing of. Yes, that concept has been used before, but when well done, it is the underpinning of many a truly marvelous story. In New York, just before New Year’s Eve, Grendels have been released, and are picking off both supernats and humans – leading up to what their leader intends to be a Times Square slaughter, ripping the blinders off the human population in a gory paean to carnage and chaos. It is up to the SPI to stop the Grendels (yes, just like in Beowulf) before the world is turned into a mythological nightmare. (Really, people – do you truly not understand that humans have a wee bit of an arsenal built up? Like, enough to destroy the world several times over? Sort of hard to fight a Predator missile with a Predator’s claws . . . Ah, the dreams of glory of a psychopath with a God complex.)

Makenna is a great heroine, mostly for the fact that she really isn’t a ‘heroine’ at all. Rather, she is a newspaper reporter who found herself thrust into the SPI because she is a seer – she can see underneath the veils that supernats wear to make them appear human. And her particular skill-set may be the only thing that can save the world from the planned chaos and slaughter. She is no Mary Sue – she makes mistakes, grave ones, but fumbles along the best she can under extremely difficult situations, helping and being helped by her new colleagues. Terror, sadness and guilt all hound her, but there are truly funny moments as well.

Lisa Shearin has another series, starring Raine Benares, which begins with Magic

Lost, Trouble Found: Raine Benares, Book 1. One of my Audible credits will be grabbing this one soon! It is narrated by Eileen Stevens, not Joanna, but as I haven’t listened to her work yet I am interested to hear how it works for the story line.

I purchased the books listing in this review. All thoughts are my own. If you enjoy my reviews, please “Like” them on Amazon.com and/or Audible.com. Thanks you!