My consuming lust was to experience their bodies. I viewed them as objects, as strangers. It is hard for me to believe a human being could have done what I’ve done. – Jeffrey Dahmer

We serial killers are your sons, we are your husbands, we are everywhere. And there will be more of your children dead tomorrow – Ted Bundy (Lady Killer) 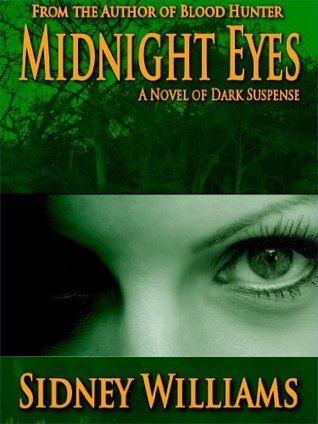 We live in isolation. The 1950’s really started the whole “Nuclear Family” phenomenon. Mother, father, children, living in isolation, grandparents and the rest of the extended family in their own little isolated pods as well. But, what happens when the Nuclear family itself goes nuclear? And what happens to the children… Nobody ever told the story of the kids, after…  Because sometimes, those families contain monsters.

The setting of Midnight Eyes is one that I truly enjoy. The swamps of southern Louisiana are the perfect setting for a serial murder mystery, with its slow, deliberate pace, brutal wet heat and the scents of swamp water and death, magnolia and rot. As you enter the swamps, it is through the past, as a serial killer strikes and then disappearing, leaving a town and its sheriff shell-shocked and the sheriff embittered for the remainder of his life.

Now, many years later the murders are happening again. Murders of such horror and brutal viciousness that the mutilation of the victims while still alive horrifies even a hardened FBI Criminal Profiler who specializes in serial killers.

I found the pace of the story somewhat uneven, but still compelling as everyone from reporters to private detectives reach for what one can only call a twisted sort of glory as they track the monster in their midst.

Readers of “true crime” might actually enjoy the story as the author utilizes his own experience as a journalist to make the setting and characters as realistic as possible.

I received this book from Audiobooks Monthly in return for a realistic review. All thoughts are my own.

The author Sidney Williams will be interviewed in the October issue of Audio Book Monthly Magazine.

The Heaven’s Rise: Due out October 15

It isn’t the big things that frighten me the most. Oh, they are frightening: the storms, the fires and floods and hurricanes like Katrina. Their devastation is horrific, tremendous, outside the realm of reality in their own way.

But those things can be shared, in all their pain and anger. What frightens me are the small things, the unseen things. The man who touches his three-year-old daughter, behind walls and in secret. The woman down the street, whose empty eyes have long given up hope for rescue from her abusive husband. The eyes of a starved and beaten animal, long past any understanding of why their loving nature has been so abused.

The Heaven’s Rise pushes those buttons, edges those boundaries, between madness and despair. Where evil is a scent or a sound, a chill running up the back of the neck. The sense of a shadow, just out of the reach of mind and eye. A memory, dropped deep within the well of the psyche, rising, groaning, into the subconscious at three in the morning.

In The Heaven’s Rise, all the evils, small and large, play a prominent role. The uncaring heartlessness of the political machine of New Orleans, the greed that played a role in the losses caused by Katrina and the tragedies that occurred before, during and after the storm. Greedy oil companies and exploding gas pipelines. The cruelty and hatred, the corruption of a body politic out of control.

But those are the large, the expected things. What shivers over my skin while reading this book are the small terrors, the 3AM night-sweats, the shadows in the corners of the room, moving and flowing, rising up. Superstition and hatred and death, and the spooky world of the Louisiana bayou jacked-up on the aftereffects of terror.

Sometimes, the nightmares that the rich can cause are worse than any dark creature, risen from the swamps. Especially given the powers of those shadows, those denizens of the darkest nights, and the fog shadowed edges of reality. It is the psychopath in his plain little house, living his plain little life, sharpening his blades in his plain little kitchen, before he walks out the door. The sociopath, passing through the crowd, innocuous and calm, quietly planning the collapse of the markets, or the deaths of thousands upon his whim.  Pol Pot. Ted Bundy. The quiet, unobtrusive fellow next door. The one you would never suspect.

The same. The same. They are all the same. The blankness in their eyes, the lack of a soul. Or a soul so blackened, so twisted, that the very act of having a soul is a torment, an automaton of evil, with lifeless, unblinking eyes. The primitive eyes of alligators, of lizards. Of blasted humans, drinking in the misery of others like a fine wine.

There is mystery and death and long hidden, deeply primitive secrets to this story, set both before and after the depredations of Katrina. Secrets and lies, and blasted human souls draw you into the book and keep you there, holding your breath while you skim the pages, drawn into the depths of greed, hatred, and pathology which would make Stephen King and M Night Shyamalan green with envy. For the horrors here are horrors of minds lost to the shadows, puppets with cut strings, dancing across the stage, deranged events in the midst of chaos. Monsters live in our minds. Our psyches. Only, sometimes? They get out.

And yet, at times, a small flame burns in the distance. The faint, small light of hope.