Review: Four Weddings And A Werewolf by Kristin Miller 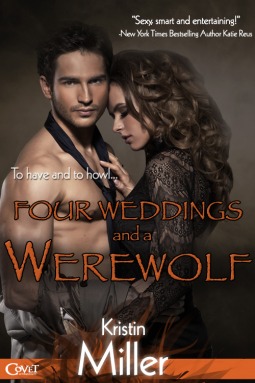 Be leery of silence. It doesn’t mean you won the argument. Often, people are just busy reloading their guns. ― Shannon L. Alder

I write for those women who do not speak, for those who do not have a voice because they were so terrified, because we are taught to respect fear more than ourselves. We’ve been taught that silence would save us, but it won’t. – Audre Lorde

Back in early September, I was lucky enough to win a copy of Four Weddings and a Werewolf by Kristin Miller. It is book two of The Seattle Wolf Pack. As I already had the first book, Gone With The Wolf, I was tickled to no end to win the second. And it didn’t let me down.

Veronica is not exactly happy about her newest wedding planning job, seeing as how the family includes werewolves. And Veronica is not happy with werewolves. Because Veronica’s sister was viciously attacked by a werewolf, a werewolf that changed her beloved sister, the only family she has left. Now, though she sometimes sees her sister, her life will never be the same. And Veronica is certain that werewolves are, animals. Completely incapable of controlling their anger.

But now, Veronica is in danger, hunted by another of their kind. And only a werewolf may be able to save her life.

There is a lot of humor in Kristin’s series, but there is a great deal of pain as well. The pain of loss and fear, and the heart pounding fear of a mad stalker, intent on taking not your life, but your very soul.

This is a paranormal romance, sure. And a fun one at that. But Kristin does more, reaching beyond the simple to something better.

As I said, I won the book, and was tickled to do so. All thoughts are my own.